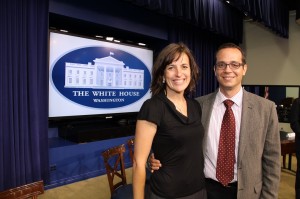 Last week, Eric Kansa, Program Developer for Open Context, was honored at the White House as a Champion of Change in Open Science. The June 20th event honored 13 “leaders and organizations promoting and using open scientific data and publications to accelerate progress and improve our world.” Eric was honored to attend the event as a representative of archaeology, and of the humanities and social sciences in general. Eric has been a vocal advocate and dedicated practitioner of open access and open data in archaeology for the past decade (indeed, he co-founded the Alexandria Archive Institute in 2001 based on these principles). This honor comes at an appropriate time, as the AAI celebrates 10 years of continual funding this summer.

The government is moving toward requiring open access to the results of federally-funded research and this Champions of Change program highlights some of the excellent work being done around open data in a variety of disciplines. Open data in archaeology (as in most of the humanities / social sciences) is still very much in its infancy. This kind of recognition will help draw attention to data sharing efforts. We are delighted to see open science, open data, and open access at the top of the agenda.

While the majority of the 13 Champions of Change in Open Science were from biomedicine, Eric and one other (Will Noel of the Walters Manuscript Collection) represented the humanities. Eric was also the only “Alt-Ac” (alternative academic) honored, as the majority of other honorees hold traditional academic or corporate positions. There is a growing global community of these Alt-Acs, who combine domain and computing expertise and are doing interesting research outside traditional Ivory Tower faculty career paths.

More information about the Champions of Change in Open Science can be found at the following links: