Previously, we’ve discussed our Aggregative series data stories. These curated lists will include book club guides, search tutorials, teaching resources, and more. However, as we assemble these ingredients, it seemed valuable to share one struggle with these data stories.

Vetting and assembling lists is hard work! We take time to digest and marinate about each work because we only want to highlight resources we’ve consumed. Furthermore, we want to construct diverse and inclusive stories. Unsurprisingly, recommendations from existing lists excluded diverse authors. That means we need to look harder for resources. In addition, we wanted to ensure our menus recommended relevant older books and new releases.

This is how The Dawn of Everything: A New History of Humanity worked its way onto our reading list. Written by, as they call themselves, a couple of white males (aka Davids, Graeber and Wengrow) the book is a (re)synthesis of human history through documents and material culture. In addition, it Anthropology Today published a review of it. We thank Dr. Brenna Hassett for bringing it to our table via twitter.

We want to use that review to segue into a discussion of how the review accented an issue we were having with our Aggregative series, non-fiction book club. Specifically, we want to comment on how the review considers the book an “entertaining fable” of the “Graeber phenomenon” and that such a tone dismisses the importance of writing for the public.

The review overall is negative and includes a number of “ad hominem remarks.” If this is the fate of books written for the public about archaeology, is it any wonder that there are so many written by folks like the Davids, and so few written by people of minoritized backgrounds? 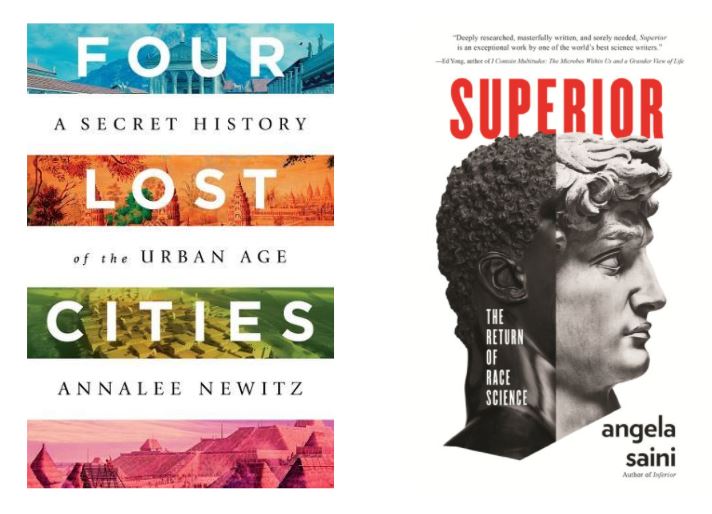 People of color (such as Angela Saini and Jason De Leon); and gender-minoritized white people (such as Annalee Newitz) write popular science books about archaeological themes. However, few of these appear on existing recommendation lists.

Furthermore, reviews like that in Anthropology Today might be why people from historically underrepresented backgrounds rarely write for the public. Why should they undertake such work, or dare to activists, when they get disdain from the academy? As a field, we can’t demand work from people of diverse backgrounds and then tear down individuals of any background who work to change the field.

If this continues, we’ll only ever get work by those who can survive writing for the public. And of course, that’s almost exclusively established, white, male academics. As a program, we’re developing something different. So, our lists are about active inclusion and reach for a wider variety of works than typical public archaeology science book lists.

Previous
Partner Highlight: Dr. Tiffany Earley-Spadoni
Next
Act 5: Where were we in our story