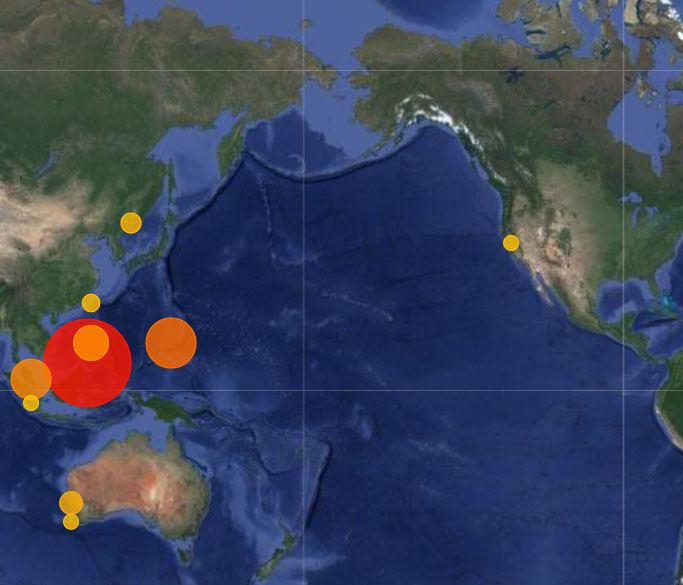 The stoneware jars come from archaeological sites all over the globe, demonstrating the extent of circulation of these Asian belongings.

Beyond the problems with all heritage and history months, the term AAPI has its own complexity. It celebrates the heritage of people from every culture on the largest continent and those of the peoples of the Pacific. In addition, I’ve seen many articles celebrating the month that focus on the heritages of Asian Americans and, purposefully or not, forget to include Indigenous Native Hawaiians or Pacific Islander Americans, such as CHamorus.

As someone of Southeast Asian heritage and aware of this problem, I wanted to explore this issue through material culture. To do this, I’m focusing on Asian stoneware jars from near San Francisco, California, and from the Northern Mariana Islands, which is a Pacific Commonwealth of the United States. I want to use these data to consider if these belongings represent both Pacific Islander American, specifically Indigenous CHamoru, and Asian American heritage. Based on the data set, there is no evidence for these pieces in Hawaii and so are unlikely to be considered part of Native Hawaiian heritage.

This is a jar fragment from the National Parks Service, Point Reyes National Seashore collection, original image is not in focus

These sherds (which is another word for pottery fragments) are from the Drakes Bay Site, near San Francisco, California and were dated to 1579/1595 AD. For me, these are definitely pieces of Asian American heritage because they represent Asian-made goods in North America.

In addition, their potential date corresponds to the earliest European-documented evidence for Filipine sailors on Spanish vessels arriving in North America. So it’s possible, that these were pieces of belongings associated with Asian sailors. For me, this creates a connection with Asian American heritage through the jars’ origins and, potentially, through their use by people of Asian heritage.

This is B1887, a whole jar from the Concepcion that was included in the analysis.

But what about the jars from the Northern Mariana Islands? These whole stoneware jars came from the 1638 Concepcion shipwreck. The available online sources for the wreck suggest that 28 of the 40 survivors were Spanish and that there were some Filipine, Black, and possibly other Indigenous crew associated with the vessel (Tan 2020).

So, to whose heritage do these jars belong?

Let’s look at what we know. First, Asian people probably made the jars. Second, they were from a Spanish ship. Third, that crew included some Asians and potentially CHamorus. Fourth, the ship sank off the coast of the island of Saipan, inhabited at the time primarily by CHamorus, who salvaged the wreck. Fifth, the jars were part of cargo recovered in the late 20th century during a commercial salvage recovery project.

CHamorus knew the location of the wreck and used its contents as pieces continued to wash ashore. And while not every item got used by a CHamoru, the wreck tells the story of how CHamorus were, for better or worse, part of the trade routes of the Pacific. So for me, these jars are part of CHamoru heritage.

So what makes something part of someone’s heritage? Is it origin, use, where it’s found, or something else? We’d probably get 10 different answers if we asked 10 different heritage professionals. And that’s ok! What I like about this data set is that it makes us consider that question.

The lifecycle of these jars encompasses the complexity of AAPI heritage because they make us consider origin, use, location, and other factors to answer the question of “whose heritage”. The collection tells a story of cultural relationships due to colonialism and these belongings make us address the complexity of those relationships.

Heritage is hard. And for me, celebrating it requires us to embrace that difficulty rather than shy away from it. So with that, consider how you’ve been celebrating AANHPI heritage month and what you can do to acknowledge the complex relationships between the many peoples whose heritage is celebrated this May.