Fall and early winter have been a whirlwind here at the Data Literacy Program (DLP). Between testing two Creative Series Data Stories and our other work, we did not post as much via AAI News. So what were we working on behind the scenes?

For the last quarter of 2022, we had some specific goals. These were to share the alpha versions of two Creative Series Data Stories on social media, finish filming more videos for Of Mycenaean Men: Public Archaeology Book Club, and have a draft publication ready based on our DLP team working together using the #30DaysToAnArticle prompts.

The one thing we didn’t finish was filming videos for our book club. It turns out filming and editing videos is pretty time consuming. Even more so when we have a lot to say about each book. So instead, we’re looking forward to finishing those in 2023 and sharing the full Of Mycenaean Men book club soon! So if you’re waiting, we’re almost there.

The rest though, we did, which is pretty cool. Unfortunately, the digital landscape where we worked became increasingly inhospitable as we went on. To better understand this, let’s travel back to those sweet moments in October when we’d all forgotten that Twitter was supposed to change hands.

Back then, we (the DLP postdocs) were super excited to use Twitter to run our full All in the Wrist (bones) Data Story. We posted every day for 31 days with awesome gifs, alt-text, and prompts to get folks in the mood for some data-driven creative creations! Paulina wrote haiku based on the prompts and we had a few other folks participate as well. There’s even been engagement with the Data Story passed October!

With such a fun response, we were excited to bring the Data Story to the publishing stage to share it as a full resource. Riding this high, we got things together to test 30 Days to an Article in November, to coincide with NaNoWriMo and its Archaeology specific version.

We’d reached out some previous facilitators of the ArchWriMo group to chat about what ArchWriMo is and why it was important to them. Then, we wrote a short article incorporating their experiences to get people excited to participate this year. And in early November, we were having some good interactions and engagement with the Data Story. After sharing the prompts, folks seemed to have fun. But a few weeks into November, this plan fell into a posthole. 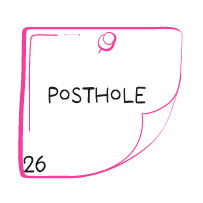 In mid-November, engagement dipped after Twitter came under new management. We had fewer non-AAI/OC staff people engage with our tweets and had our lowest follower count on 16 November. Some of it was mid-month slump but some of this was a migration away from Twitter because of new ownership.

Many folks lost followers despite their best efforts and people (including us) began using the platform less. Regardless, we persevered and finished the month! Unfortunately, based on traffic to the AAI website itself, this was a hit to the program and the reach of our Data Story. We’ll see the full impact of this in a few weeks when we send out our testing surveys for those Data Stories. So, if you did take a look at them, let us know! We’ll also be shifting our approach to social media this year, so if you know where you’d like to see AAI/OC (in your inbox or elsewhere) please reach out or take our survey!

On the upside, we’re working on a couple of publications whose drafts were products of November’s writing. While we didn’t always use our prompts, the DLP built a steady writing habit through the month. We can’t share what we’re working on just yet but we hope they’ll be useful publications in the future. As a preview, we’re exploring digital archaeological data in practice and considering what they mean for practicing justice through archaeology. At least, that’s what we hope…a lot can happen between having an idea for a paper and publication!

Overall, we want to take the feedback from both of our Creative Series Data Stories and turn them into awesome resources for us to share soon. So make sure to check us out again as we look forward to cultivating archaeological data literacy in 2023!